THE RETURNED OBJECTS
Every hotel, great and small, expects for some guests to take home unofficial "souvenirs" of their visit. This is especially true at the Waldorf Astoria, where spoons and coffee service are more than just silverware, but pieces of personal and world history.
In the summer of 2012, the Waldorf Astoria went to the public with an unusual request: to return any surreptitious "amenities" that checked out with guests. The response was overwhelming, with former guests - and their descendants - returning objects from around the globe. In addition to silverware and services, their stories have become parts of the Waldorf Astoria's tapestry. Here are a few of the items that have been returned to us: 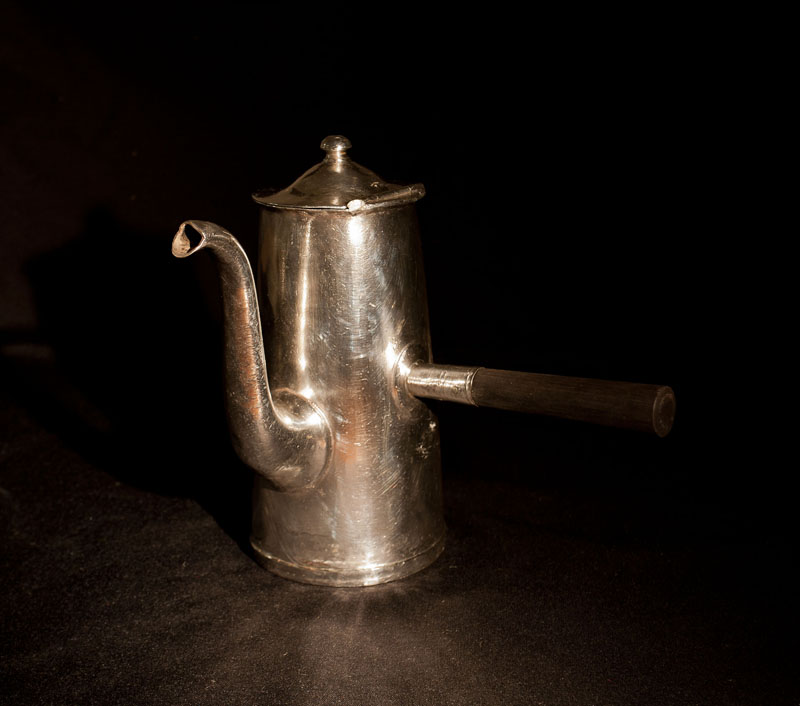 This silver coffee pot dates from 1938, when the donor's parents spent their honeymoon at the Waldorf Astoria. Despite having little money, the newlyweds wanted their special night to be at nothing less than "America's Palace"; at the time, the rate was approximately $8 per night, and a meal for two was $10. At some point, the couple decided to take a coffee pot as a souvenir of their romantic visit; over the years, it was passed down through the family to the donor. The unusual design of this coffee pot was crafted with service in mind. Instead of a loop on the side of the pot, it has a long handle on the middle. This allows for waiters to pour coffee at the diners' table without having to reach over their shoulders, much to the convienence of both server and served. This pot in particular would have held Savarin coffee, which the Waldorf Astoria helped make famous. 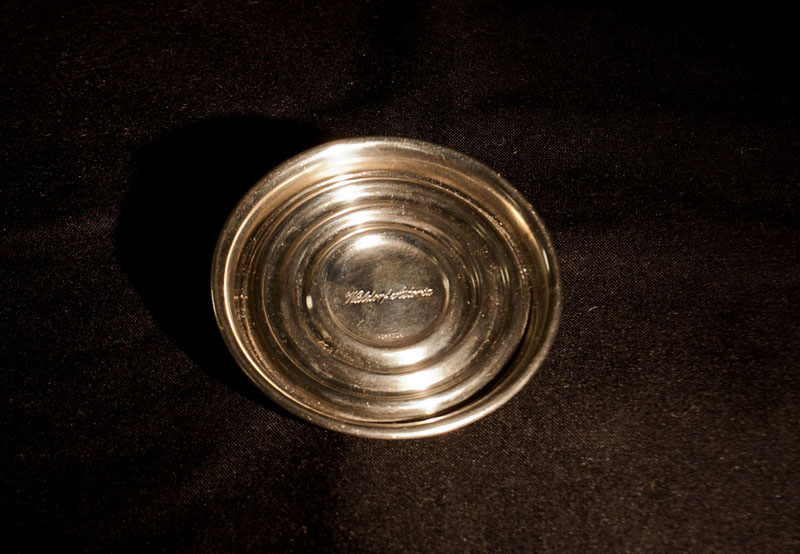 Not all returned items came with pleasant tales. This metal object was designed as a coaster for wine bottles, to prevent damage to tablecloths. During the likely period of this piece in the 1950s, the Waldorf Astoria used sixty thousand bottles of wine a year; thus, coasters such as this saved a great deal of cleaning and repair. Its ridged design helps to raise the bottle above collected condensation, preventing it from sitting in water. This object was sent to us by a family that traced it to a wealthy ancestor. They knew him as a generous man that used his influence and money to help those in need, and not one to engage in petty theft. By associating him with the coaster, they realized that he must have taken it from the Waldorf Astoria surrepitiously. Thus, while the goal of the amnesty program was to uncover the history of the Waldorf Astoria, it has helped individuals discover their own family history - for better and worse. 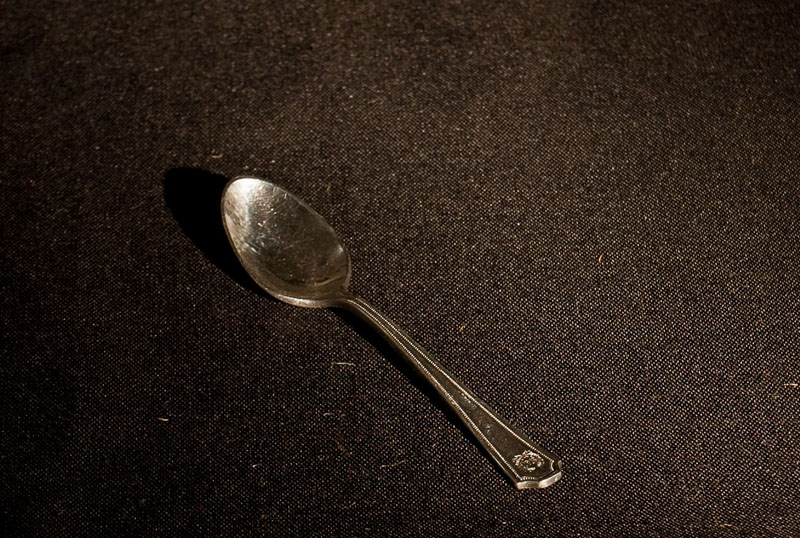 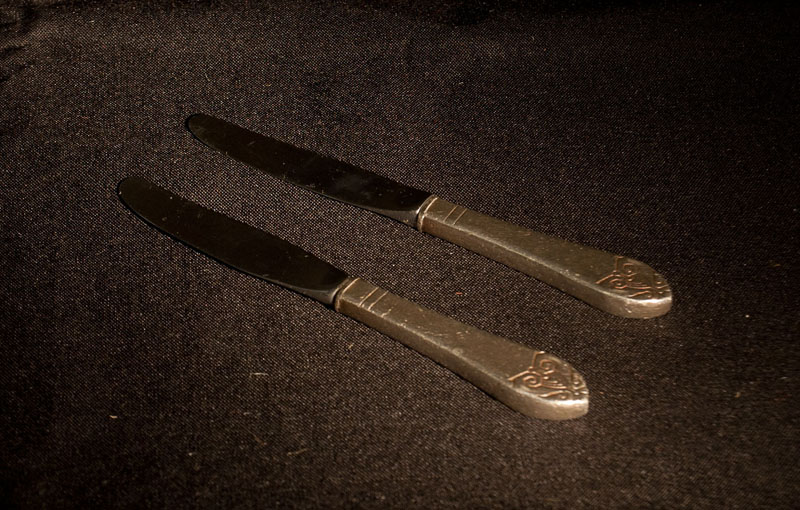 Some items were taken to commemorate award ceremonies at "The Greatest of Them All." This pair of knives, while seemingly part of a matched pair, were taken at two separate events by one guest. In the 1950's, a charity raised money for children's hospitals via donated clothes sales, with the most successful sellers being treated to a luncheon at the Waldorf Astoria. Twice, one of the recipients of this award was Gussie Herold, who brought home one knife from each luncheon as a souvenir. These were passed down to her granddaughter Paula Herold, who kindly donated them through our amnesty program. 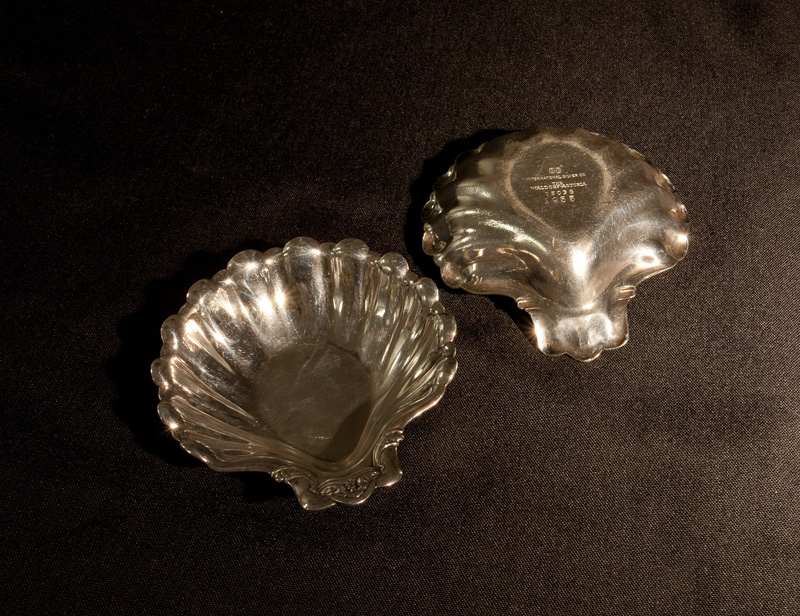 Gussie Herold was not the only award recipient that came home with an extra trophy. These shell-shaped nut dishes were used at the Peacock Alley bar in the late 1950's, providing snacks to late-night guests. The donor's father was awarded a free weekend in a Waldorf suite for his performance as an appliance salesman, and brought his family to celebrate. While the donor and her sister ordered room service - an amenity only found in the finest hotels - and played elevator with the sliding closet doors, their father enjoyed after-conference drinks in Peacock Alley. He was impressed by their unique design and craftsmanship, and left the bar with more silver than he entered with. His family cherished the dishes, both for their design and the memories of a weekend at the Waldorf. The donor's family used them for decades at holiday events, where they occupied a place on the dinner table. 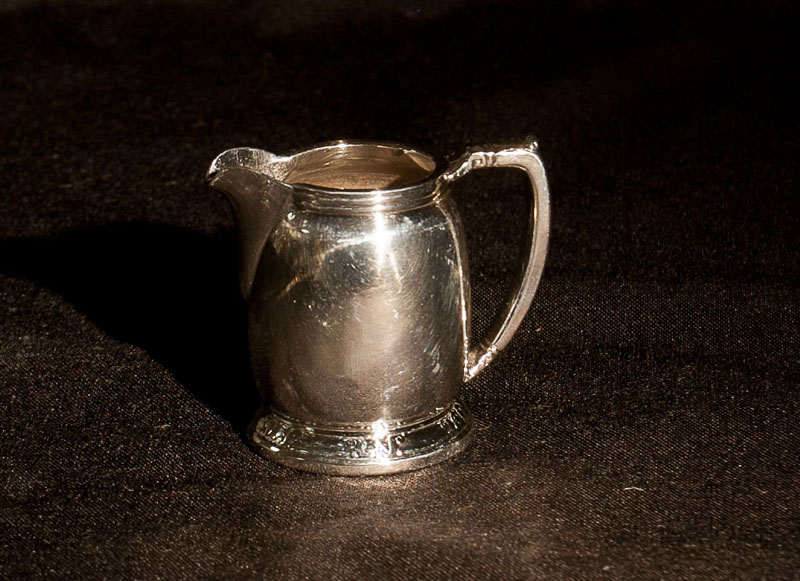 An addition to our coffee service set is a 1948 silver creamer. Unlike the other items in this exhibit, this does not come with a story behind it - the donor bought it at a yard sale, and thus does not know its history. Furthermore, the package had no name on the return address, and the enclosed letter was signed "Jane Doe", thus taking our amnesty aspect rather seriously. As such, this creamer will forever remain a mystery - who knows what tales it could tell from its decades of service?

Is it coincidence or fate that this steel bottle-opener popped up in an estate sale the exact same week that the donor heard about our Amnesty Program? However it came about, we're pleased to have this fellow back within in the Waldorf Astoria walls and are intrigued by the colorful packaging in which it arrived - the stamps alone look like they could tell some stories! While the bottle-opener's provenance is unknown, we are certain it has seen quite a few tops popped over the years. 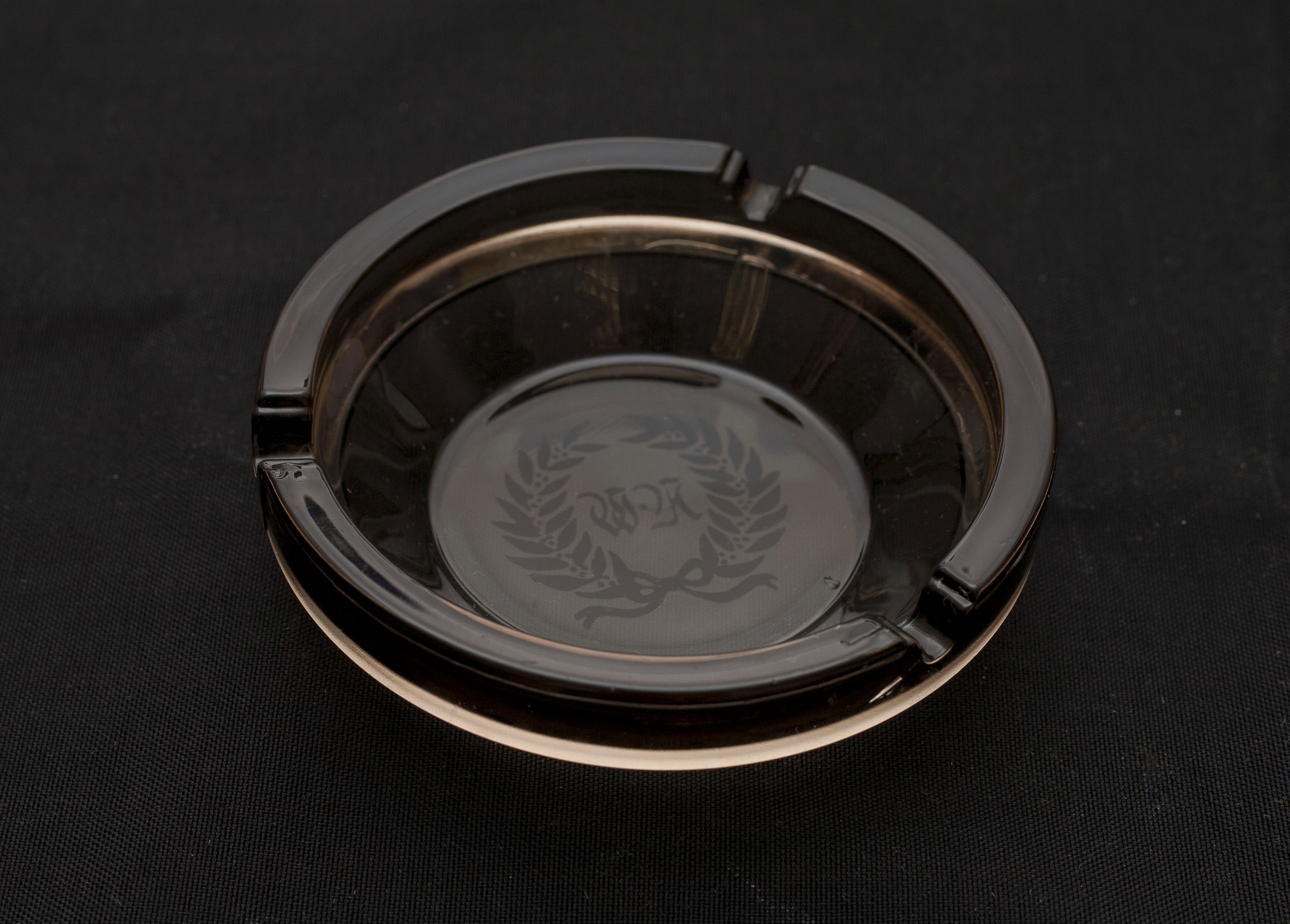 A late arrival to the Amnesty Collection is this pristine smoke-glass ashtray with W-A logo painted on the underside. While the provenance is as yet unknown (research is underway!) we estimate that this was in use at the hotel in approximately the 1970s or 80s. 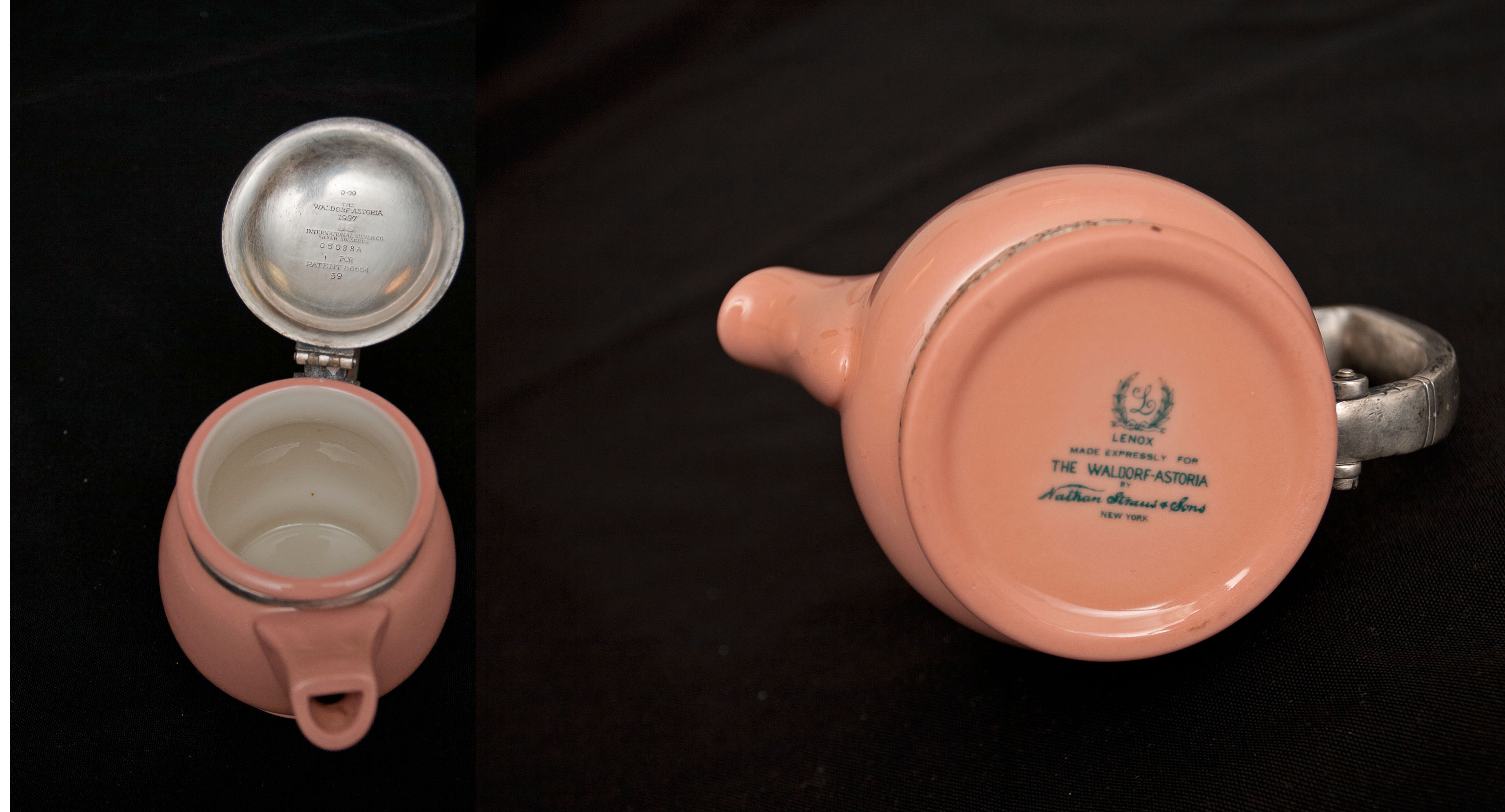 This adorable pink teapot was donated by Mr. Nathanael Mullener who recalls it being a feature of his household as a child growing up in Jackson Heights, Queens. Dated 1937, it is the cheeriest of colors and is designed to serve one cup of tea just perfectly. Mr. Mullener's family felt closely connected to the Waldorf Astoria - his father lived close by at some point - and the teapot has been treasured over the last 75 years. However, Mr. Mullener always felt a pang of guilt when he glanced over at it, knowing that it must have been 'lifted', not 'gifted'. He is not aware of how the teapot came into his family's hands but upon hearing of our Amnesty Program, Mr. Mullener polished the silver features and brought it to New York City in person, returning it to its "rightful home". Watch Matt Zolbe (our Director of Sales & Marketing) and Mr. Mullener talk about it on CBS News: here . 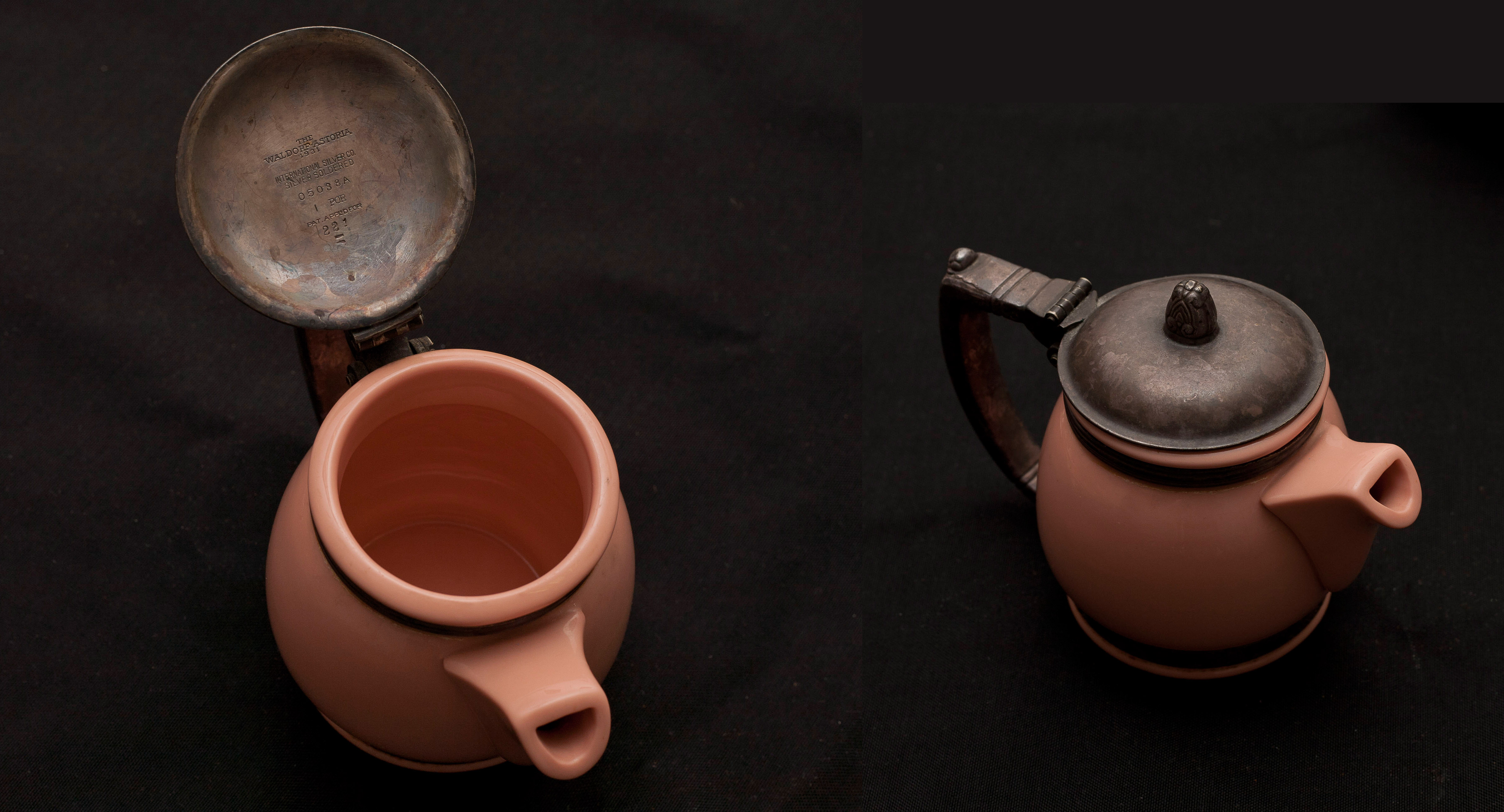 In an almost unbelievable coincidence, shortly after we heard from Mr. Mullener, a second pink teapot arrived in the mail! This one is dated 1931 and it is likely that both teapots were used during breakfast and afternoon tea service in Oscar's and Café Savarin. The donor of this teapot, Mr. Larry Silva, believes his parents were his only relatives that may have been in New York at this time - they passed through the city on a trip to Italy. Perhaps they had such a wonderful cup of tea at the Waldorf, they felt the teapot was a necessary item for their travels. When Mr. Silva's mother passed away, he found this stored in a cabinet and he kindly donated it to the collection for all to see. 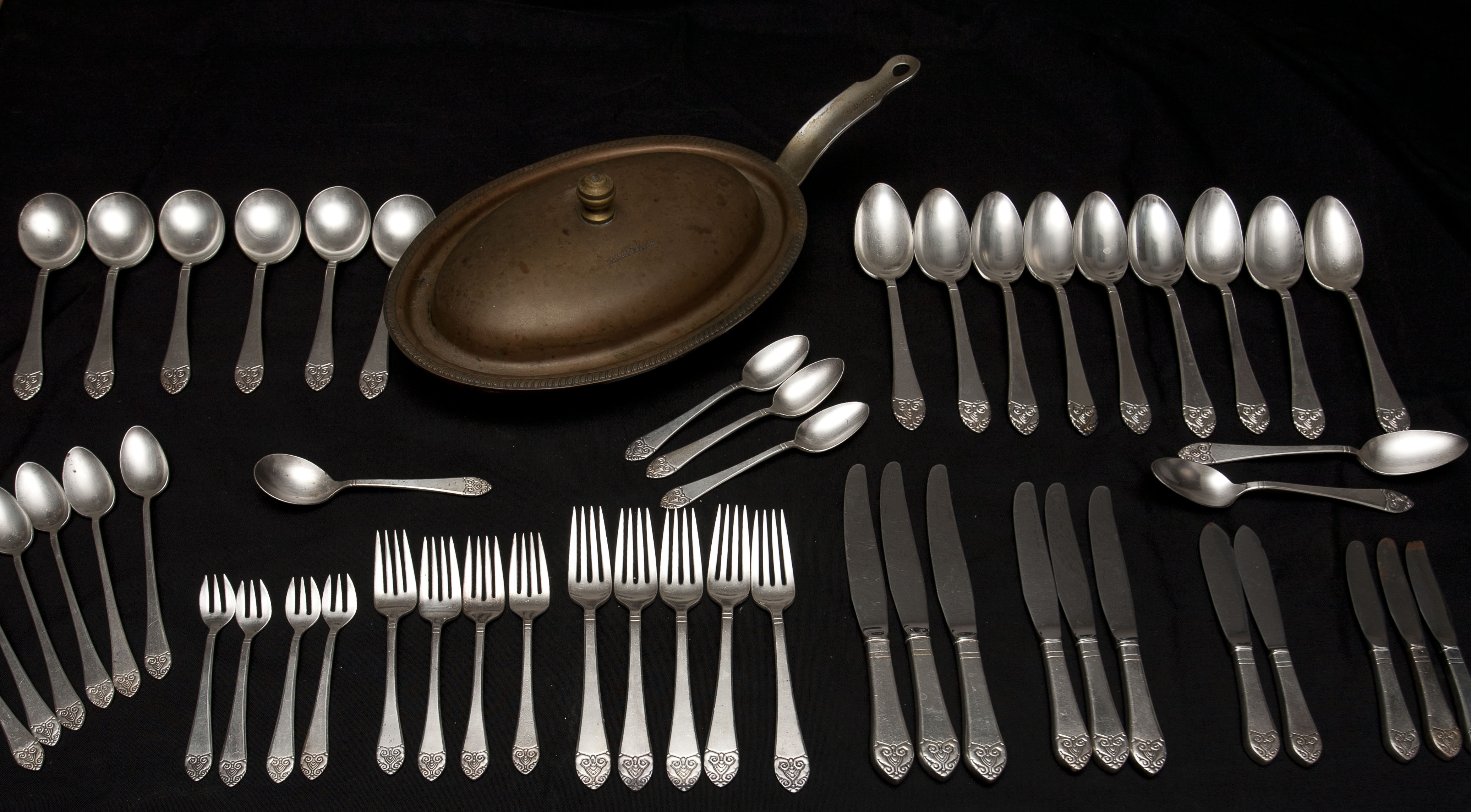 Our largest donation to date arrived recently, courtesy of Mr. Joe Molick. Containing 51 pieces of Waldorf Astoria cutlery and this sturdy copper and steel frying pan, the story behind the collection is as unique as the items themselves... The Molick family's history is entwined with the Waldorf Astoria. Mr. Molick's uncle, John Kudlac, worked in the kitchen of one of our restaurants and Mr. Molick's mother also had a friend who worked here - a gentleman by the name of Bob. We can trace the story of the items back to Bob, who approximately 50 years ago contacted Mrs. Molick asserting, in a somewhat creative take on events, that the Waldorf Astoria was discarding cutlery and other kitchen items. Mrs. Molick, delighted by her unexpected good fortune, accepted the 'salvaged' items and kept them in her home for years. We do not know what became of Bob, but Mr. Molick discovered the collection 25 years ago, shortly after his mother passed away. Upon hearing of our Amnesty Program, he sent these items to us to add an interesting piece of history to our collection. 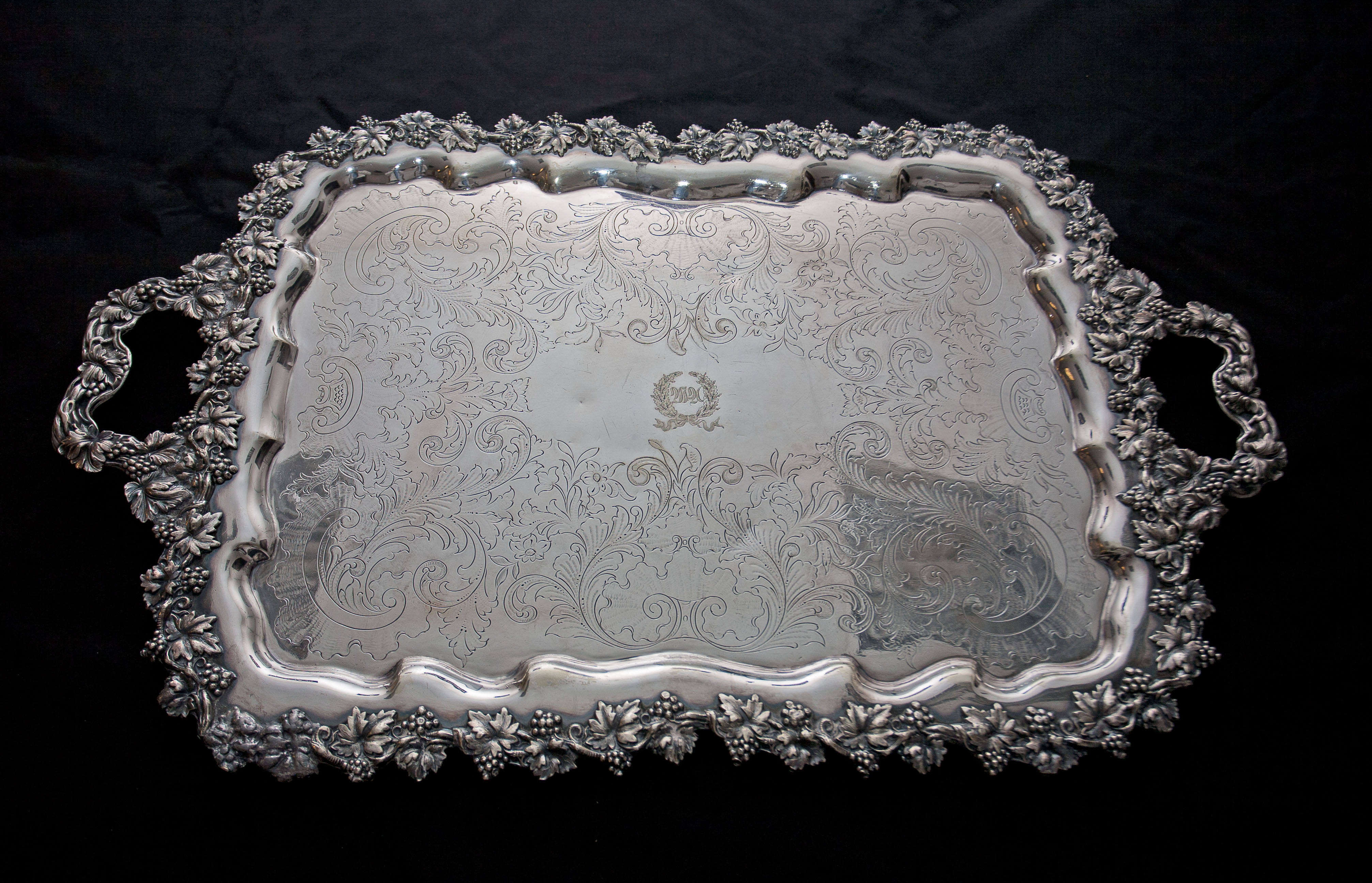 When looking at this stunning, large, silver-plated serving tray, one might ask how on earth it might be removed without anyone noticing... But, this is the only item we have received that comes without a tale of pilfering. Donated by Mr. Kent Turner, this tray belonged to his Grandfather, a banker from Norwich, New York, who spent a great deal of time at the old Waldorf Astoria, located on Fifth Avenue and 34th Street. He had glimpsed fondly at this tray over the years in its position in the main dining room where it displayed an array of pastel-colored petits fours. When he heard that the hotel was closing, he knew the tray had to be his and he was finally able to purchase it. Mr. Turner's Grandfather passed in 1945 and we are happy to be able to display it so it may please the eyes of today's guests as much as it did his back then. 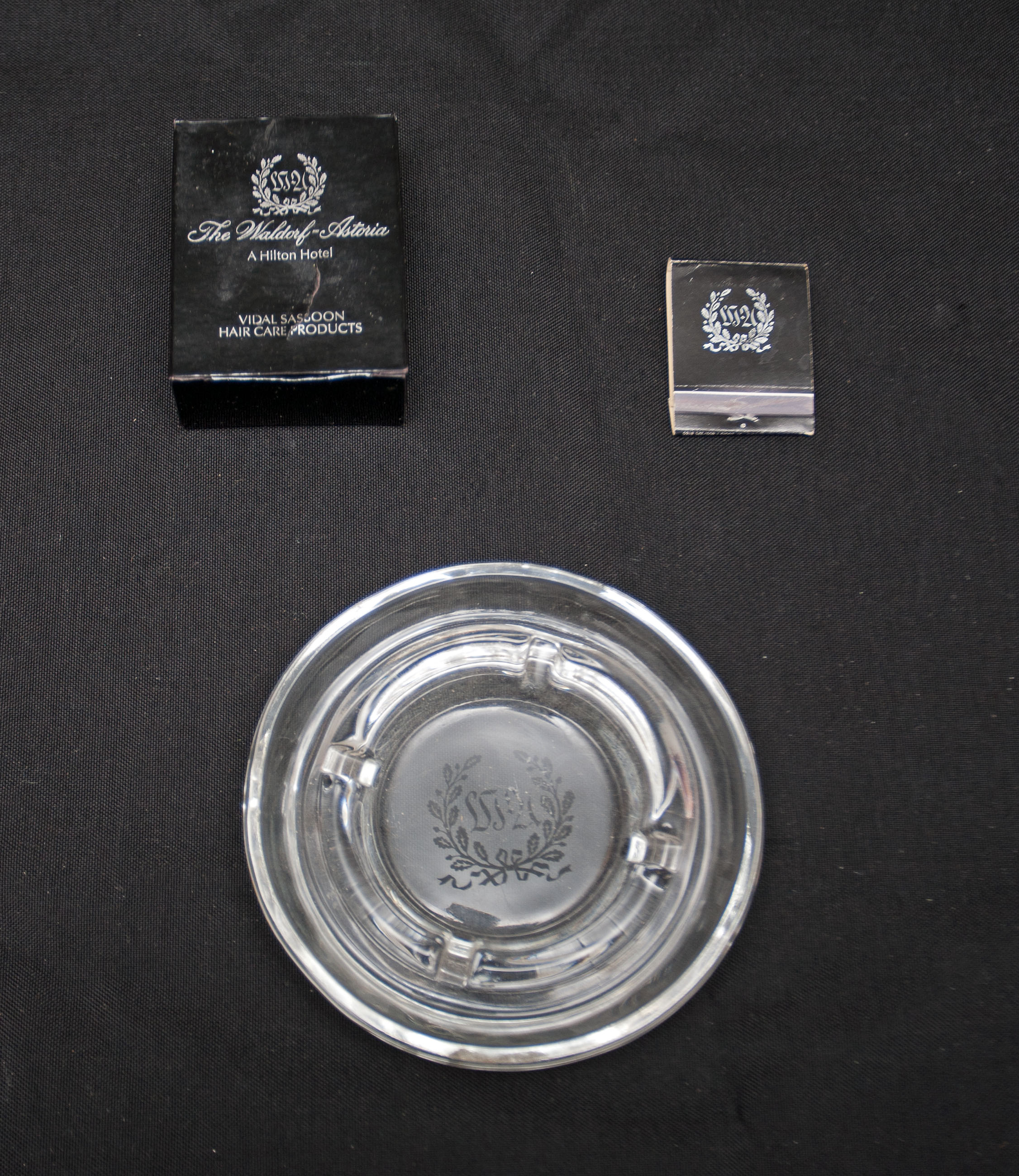 This collection of bathroom and bedroom amenities arrived with a touching story. Ms. Viola Sullivan lived in New York for most of her life and she loved it - one of her favorite things about it was the Waldorf Astoria. Although she retired to and ultimately passed away in Toronto, she never stopped being a New Yorker. For her 75th birthday, her daughters, Ms. Gail Dykstra and Ms Jean O'Sullivan, treated her to a fabulous New York weekend at the Waldorf. She kept these items as a memento of the wonderful time she had. Ms. Dykstra and Ms. O'Sullivan kindly sent these to us to keep in our collection of memories shared with former guests. 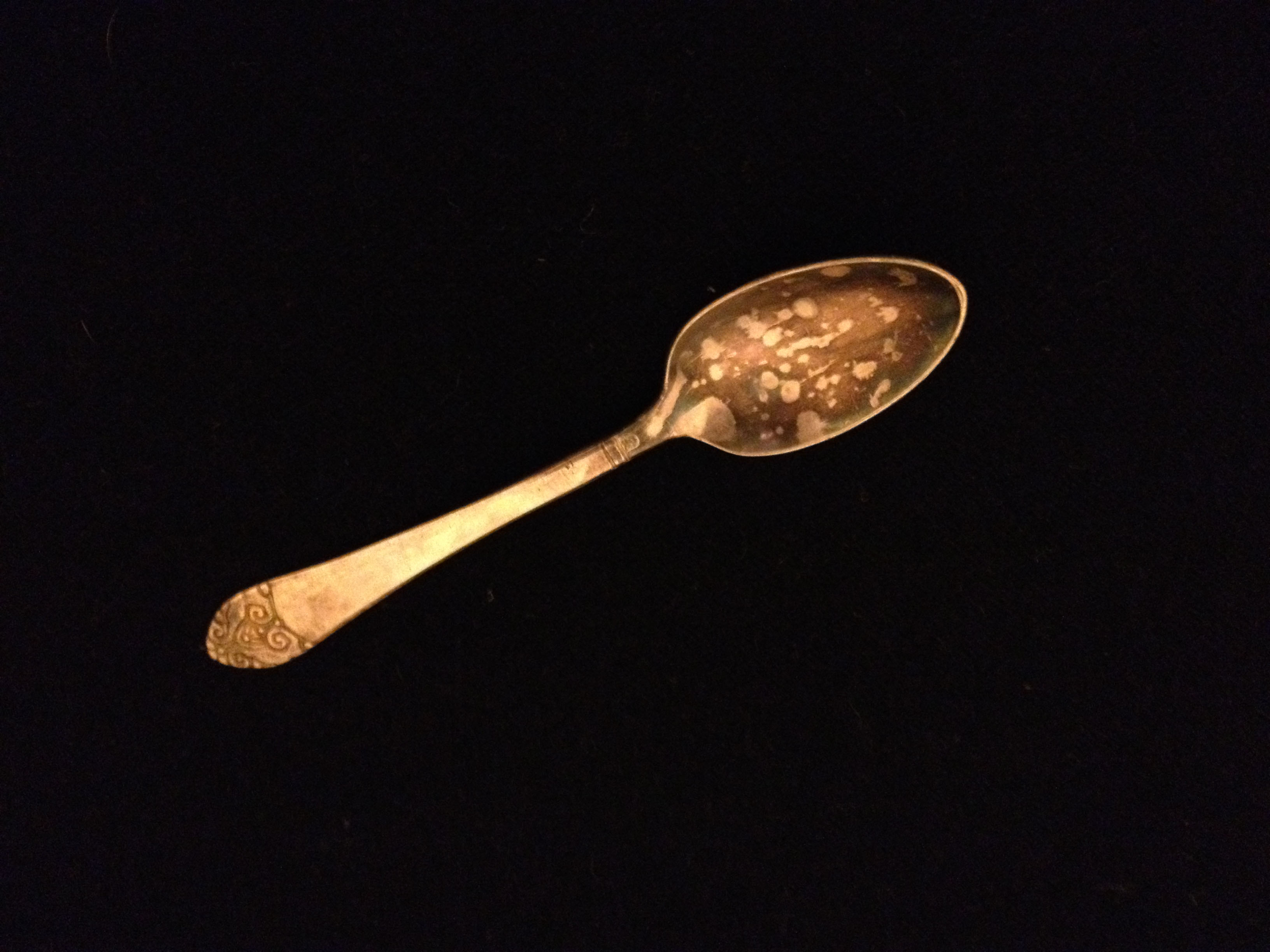 On a chilly afternoon in December, a well-dressed lady arrived at the Waldorf Astoria Public Relations office bearing one silver demitasse spoon. In adherence to the 'no questions asked' promise of our Amnesty Program, we received the spoon without raising any eyebrows or prying for any clues. We waited to see what story the donor might tell us but unfortunately she was not willing to impart any information except for her severe disdain for theft. This might be the most mysterious donation we have received and we are longing to know a little more about the travels of this darling little spoon.