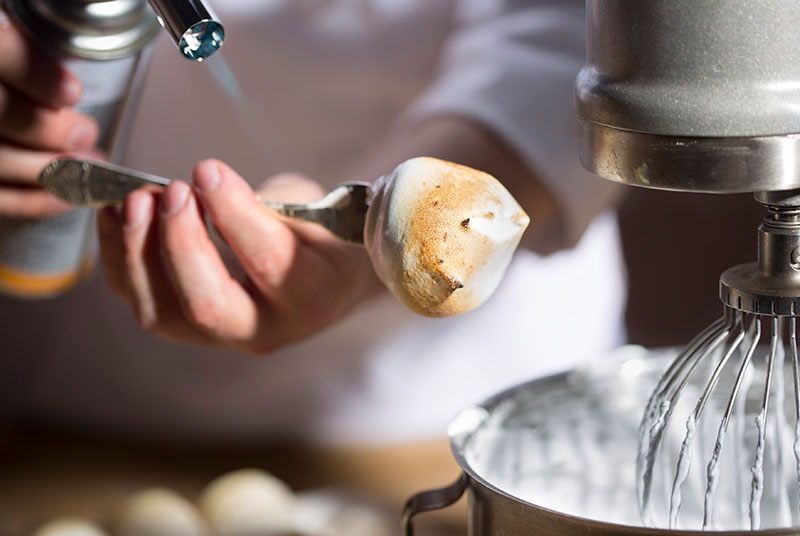 Not your ordinary “lollipop,” our version gives diners a perfect taste of the unforgettable dessert, where fresh bites of layer cake are coated in luscious ice cream—in this case, a homemade treat of frozen cream that has been sweetened only with “Top of the Waldorf Honey, our signature sweetener produced in beehives on the 20th floor rooftop garden.

Each “pop” is then coated in an egg white meringue and frozen. Before service, a Chef lightly browns the meringue over an open flame without melting the creamy goodness that waits underneath.

“TOP OF THE WALDORF” HONEY

The Waldorf Astoria’s farm-to-table, eco-friendly cuisine was highlighted by the beehives on the hotel’s 20th floor rooftop garden. With some 360,000 European Honey bees producing “Top of The Waldorf ” Rooftop Honey, the hives yield 450 pounds of honey yearly.

The honey and other rooftop garden ingredients were served in dishes at Peacock Alley (including the famed Sunday Brunch) and Bull & Bear Prime Steakhouse as well as in creative cocktails such as the Rooftop Ramble and Wax Poetic. They also inspired new Spa treatments.

During renovation, the beehives are hosted with their beekeeper in Connecticut.