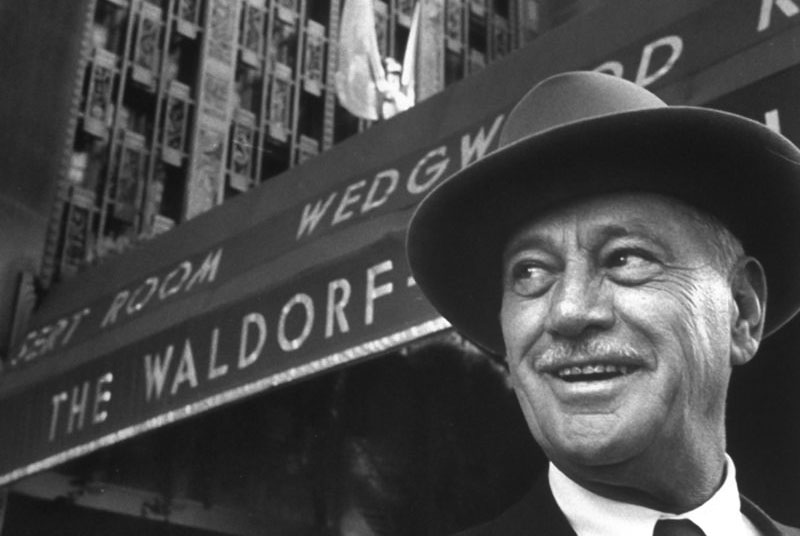 • Conrad Hilton acquired his fame as the hotelman who owned prestigious landmark hotels: The Waldorf=Astoria, The Plaza, the Steven’s (at one time the largest hotel in the world, now called the Chicago Hilton and Towers), the Palmer House in Chicago; the Townhouse in Beverly Hills; the Mayflower in Washington, DC, and the entire chain of Statler Hotels.

• When Hilton was thinking of buying the Waldorf, he said “I’ll buy it, and prove that there is no reason why the Waldorf could not be run like any other big business and make money.”

• It took several years of negotiations to buy the Waldorf. In 1946, the Hilton Hotels Corporation was founded with Conrad Hilton as President and 3 years later, on October 1949, he gained 68% of the Waldorf’s common stock and management control of the hotel of his dreams.

• Conrad Hilton expected the Waldorf to be around for a long time, perhaps another 50 years. His thought was that the first Waldorf became obsolete so quickly (36 years) because hotel builders didn’t know how to build them back in 1893. “The great era of hotel building was in the twenties” he said, and the Waldorf was built at the end of that era. Everything they knew at the end of that great hotel era went into the Waldorf.

• Not only was the Waldorf=Astoria a successful hotel operation, it also provided offices and accommodations for the American delegation to the United Nations. Many foreign ambassadors, American political leaders and international entertainers maintained apartments at this hotel — and Hilton was considered a friend by many of these dignitaries.

• Conrad Hilton decided to live half of the year at the Waldorf. A suite on the 5th floor was transformed into office and living quarters.

• He continued to work in his office until a week before his death at 91.