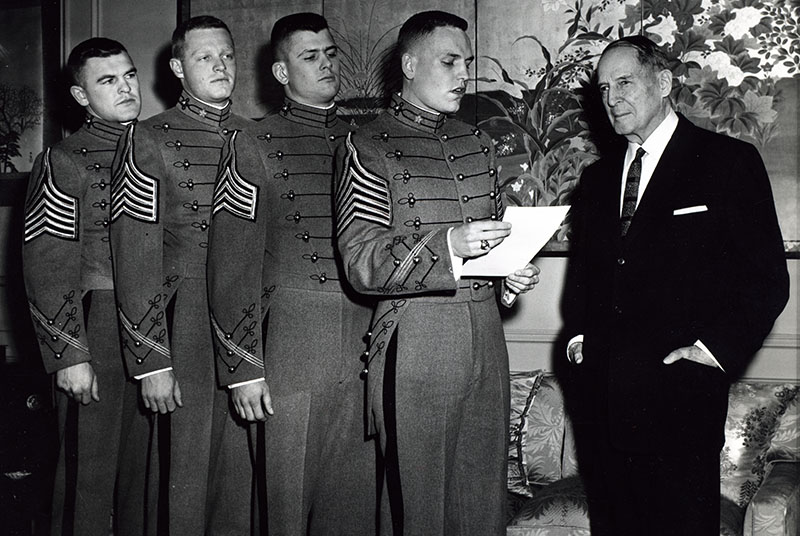 • General of the Army Douglas MacArthur served his country as a soldier for more than 60 years. He achieved the highest acclaim for his exploits as a grand strategist in World War II and in Korea and then held the center stage in one of the bitterest civil versus military controversies in the history of the nation. Virtually every military honor was bestowed upon him, yet his active career ended in bitterness and recrimination when he was relieved of his command in the midst of a war by his Commander in Chief.

• MacArthur and Jean Marie Faircloth spent the last years of their life together, from 1952 to 1964 in the Waldorf Towers, on the 32 and 37 floor. Ironically both Hoover and MacArthur resided at the Waldorf-Astoria Hotel in New York after retirement, both supreme individualists, remaining on friendly terms. MacArthur was elected chairman of the board of Remington Rand, a corporation which had annual sales of over $1.1 billion in 1961. In that year he earned a salary of $68,000, in addition to $20,000 pay and allowances as a general of the army.

• The Waldorf became the setting for MacArthur’s annual birthday party on January 26th, thrown by the general’s former deputy chief engineer, Major General Leif J. Sverdrup. At the 1960 celebration for MacArthur’s 80th, many of his friends were startled by the general’s deteriorating health. The next day he collapsed and was rushed into surgery at St. Luke’s Hospital to control a severely swollen prostate. MacArthur died four years later at Walter Reed Army Hospital on April 5, 1964, of biliary cirrhosis. Jean Marie Faircloth, continued to live in the Waldorf Towers, on the 37th floor, until her own death in 2000.

• MacArthur’s work desk resided in the bedroom of The Waldorf Astoria Presidential Suite, 35A.