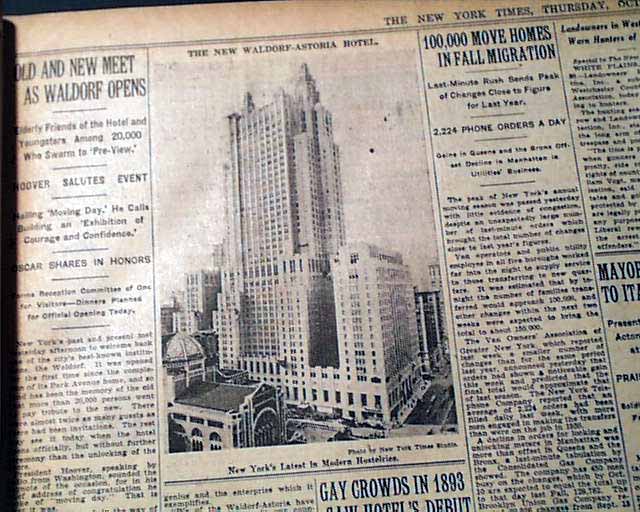 • The hotel was built in 22 months

• Xavier Cugat and the Gigiloes were the featured entertainment while President Herbert Hoover announced the opening during his radio address to the nation.

• Schultze and Weaver was the architectural firm retained by Lucius Boomer, three prominent banks and the New York Central Railroad, which contributed $10 million to the project. This firm already had to its credit such buildings as the Sherry-Netherland Hotel, the Park Lane, both of New York; the Breakers Hotel in Palm Beach; the Biltmore and the Harriman Bank Building in Los Angeles.

• From April 1929 to January 1930, the land was cleared of the 4 previous occupants: actual construction began then and the hotel opened 21 months later.

• Many aspects of the hotel’s construction were considered years ahead of their time- the telephone system which was analogous to a 25,000 person city set-up; a public address system which enabled the hotel to page throughout the building; a Western Electric sound picture system in the ballroom; the world’s largest hotel organ with over 3300 pipes; radios in all rooms with a state-of-the-art antennae system. Guests were charmed by indirect lighting, cove lighting, reflected lighting, and decorative effects, variable at command- all new to the industry.